Leo claimed the Doña Elena gift packs we both won on The Morning Rush! Yey! Each gift pack contains 3 kinds of olive oil, 3 kinds of pasta, a can of pimientos, a can of tomatoes, a pack of anchovies, and a bottle of olives. Can’t wait to use them!!! ♥

Last week, I won a gift pack from the Doña Elena promo on The Morning Rush. This morning, it was Leo‘s turn! Here are some of the tweets we got after he won! 😀 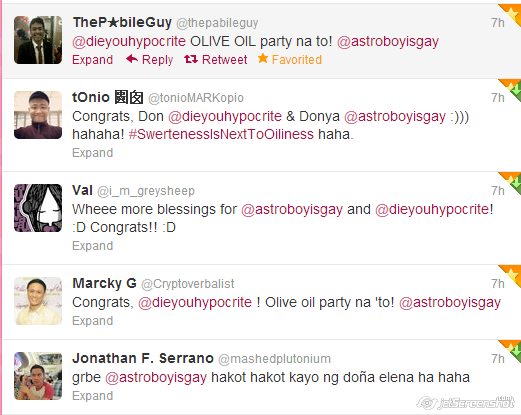 My first win for this year: a pair of tickets to the Monster Movie Premiere of “Jack Reacher.” Originally, I wanted to go for the “Les Miserables” tickets, but when I learned that the screening will be at Resorts World (Newport Cinema), I decided to go for “Jack Reacher” instead. Too far! Hehe 😀 Won the tickets on The Morning Rush with Chico and Delamar 😉

Yehes, I have a year-end blog entry! 😀 I’ll start with some of the highlights for each month:

– My dear Leo won two Asha phones for his “Why do you QWERTY?” essay.

– Mikey Bustos replied to my tweet and I got to meet him in person thanks to The Morning Rush!

– I was able to attend the first book signing of Chico and Delamar! 🙂

– I passed my resignation letter!

– I resigned after working for three years at Chungdahm! One of the best decisions I made haha =p And then I started to work AT home, thanks to Odesk!

– Leo and I won a GC each for an overnight stay for two with buffet breakfast at the Holiday Inn! Yes, we both won! 😀

– After nearly six years in the US, my father came home! :’) He arrived in time for my 26th birthday and my brother’s graduation! ❤

– As a major gift for the years he was away, Papa made sure we had a family trip abroad: we went to Singapore! I met some of the SG Rushers there!

– Got to use the Holiday Inn overnight GC; my siblings and I stayed there after watching “The Avengers” (thanks to Lenovo!)

– The biggest and one of the most important events ever: my parents and brother migrated to the US, leaving me and my sister here. 😦

– Celebrated our 22nd month by staying at the Picasso hotel in Makati! Leo won that overnight stay in December of 2011. 🙂

– We were able to watch Lifehouse concert because first, Leo won Upper box B tickets thanks to Dayly Entertainment, and second, because of my RX friend Arden (a.k.a Alpha of Radio One before), we suddenly found ourselves in the Lower Box section! Lucky much! 😀

– Leo and I watched another concert for free: ICONS at the MOA Arena. I won the tickets via Guestlist.ph 🙂

– I learned how to cook, like really cook. Haha! My first masterpiece: I was able to replicate my mom’s carbonara!

– Leo won another phone, an Alcatel Glory X918 thanks to the Morning Rush! We sold the phone to a fellow rusher hehe 😀

– Back to watching the UP Fighting Maroons Men’s Basketball team’s games live! UP FIGHT!

– Leo and I celebrated our 2nd anniversary! We used the money we got from selling the Alcatel phone he won and we also used the Holiday Inn GC he won last February. ❤

– Thanks to Fofo Lifestyle, I was able to organize my first give-away on the UP Fighting Maroons’ fan page! 🙂

– Potted Potter!!! So funny! 😀 A must-see parody whether you’re a fan of the Harry Potter series or not. 🙂

– Leo won another phone on The Morning Rush again!!! This time, it’s a high-end one and so far, the first of it’s kind: a Samsung Galaxy Beam. It has a projector!!!

– The UP Pep Squad won this year’s Cheering Competition again! Woot! I also got to meet some of them thanks to The Morning Rush!

– I finally got to see Delamar’s son – the very handsome Cooper – in person! ❤

– Got to meet Vice Ganda, thanks again to the Morning Rush!

– Leo and I finally got to try Yabu: House of Katsu! Great food, quality service!

– Leo claimed the Samsung Galaxy Beam he won and we decided to keep it. It is both ours, but I’m the one who’s currently using it. 🙂 Because of that phone, I finally created an Instagram account!

– Got to watch “Rise of the Guardians” at IMAX thanks to Pinoy Exchange! One of my favorite movies of the year!

– Had a lot of food trips with Leo and some of my closest Rusher friends!

– The Morning Rush Book 2! Leo and I have entries yey!

– Was able to secure premium tickets to The Script’s concert next year! I’ll be watching them in the front row woohoo! Thank you to LT for the help! 🙂

– Hosted my first ever house party; it was tiring but I felt really happy! ❤

– I found a new daddy – Davidson hahahaha 😀 One of my favorite Rushers! He’s so funny and makulit!

– Completed my third Project 365! Can’t wait to begin my 4th one tomorrow!

Whew! It’s been a really, really fruitful year! I won prizes for each month of 2012, even Leo had his share, and we’ve won a lot of huge prizes! 😀 Well, whether big or small, a prize is still a prize, and we’re really grateful and we feel truly blessed.

2012 has also taught me to become more independent as I am now in charge of our house: cleaning it, paying bills, maintaining our cars, doing house chores, etc. Working at home has a lot of perks, and I am really thankful that even if I’m earning less now, I actually am able to save more than when I was working in an office!

I miss my parents and brother, but thanks to my sister, my boyfriend, and my friends (particularly the Circle of Winners and Rushers), the loneliness I feel sometimes is kept at bay. I love you all! ❤ Here’s to more wins, love, friends, fun, good luck, good vibes, and blessings!!! HAPPY NEW YEAR!!! ❤

P.S. Aside from Leo, I would like to mention some of the people I feel closest to or have at least earned my trust as a friend (ang taray hahaha). From the Circle of Winners: Geraldine, Jesfer, and Shiela – thank you for the continued friendship even if some of us have already left Chungdahm. From the Rushers (for easier identification, I shall mention your Rusher names): KittRitch, Cryptoverbalist, TonioMarkopio, MashedPlutonium, Czarovic, and Ahltitude – Here’s to more Viberations and food trips hahaha! ❤ Love you guys! ^^ 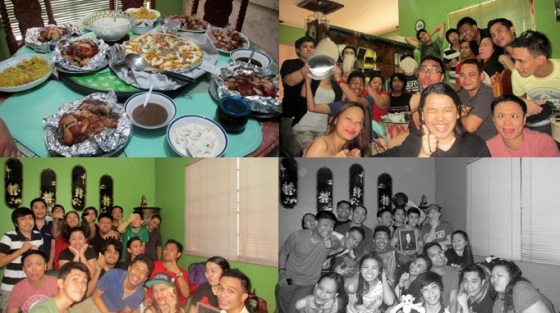 This is probably my last win for the year hihi 😀 In fairness, it’s been a really fruitful 2012 as I won something every month! Even Leo won a lot of stuff including 4 phones (2 Nokia Asha units, 1 Alcatel Glory X phone, and 1 Samsung Galaxy Beam). Anyway, I won a Doña Elena gift pack on The Morning Rush with Chico and Delamar! According to Delle, the gift pack’s really awesome because it contains a lot of products from Doña Elena (not just olive oil). I’m really excited to claim the prize because I know it’s really useful! 😀 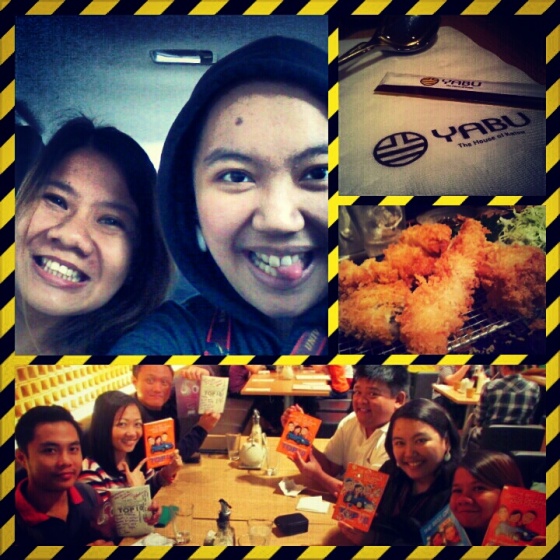 Had a COOPERific Christmas Eve with some Rushers hehe 😀 Had lunch at Army Navy. 🙂 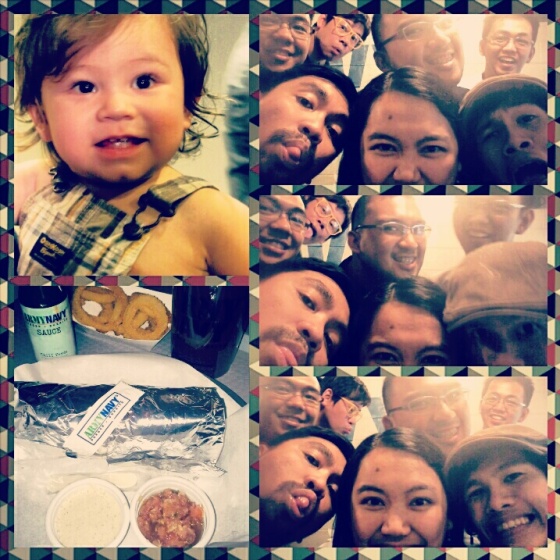 Nah, the world didn’t end 😀 Had lunch with some Rushers at Yabu: House of Katsu in Megamall! I tried their new Menshi Katsu Set and it was heavenly! Beef + American cheese! Winner! Thanks to Marc, I was also able to taste their soft shell crab, it’s also super delicious! 😀 Thanks to Ahl for the gummy worms haha 😀 Special participation ang Trolli Fan Club 😀 Asked some people to sign my copy of The Morning Rush Book 2, and I signed some books as well! 😀 Yabu + Rushers = Deliciously awesome fun! 😀 Ano raw?! 🙂